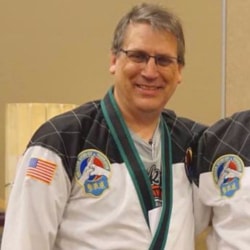 Over 35 years ago, I was a shy 14-year-old boy with a stutter. Fortunately, my parents allowed me to join a local Martial Arts school even though they were nervous about the “fighting” it entailed – something they soon came to realize was a radical misconception. As soon as I walked in to my first class, I felt something that I had never experienced before.

It didn’t matter where I was from, what clothes I wore or even what my parents did for a living. All that mattered was that I was hungry to learn.

At that time, what is now considered ‘bullying’ was simply a rite of passage and, due to my differences, I bore the brunt of much of it. Before Martial Arts, I recall my home being the only safe space where I could escape my peers’ harassment, scrutiny and judgement. In today’s world, the effects of bullying are only heightened as children and teens are subjected to social media 24/7/365, often causing inescapable social anxiety. As more kids are building their self-esteem on the size of their social media following, they face uncertainty, lack of socialization, lack of organization and an almost impenetrable lack of connection. For many children, there is no longer a safe space into which they can retreat as the social scrutiny, now perfectly portable, follows them into the home.

As I made it into the middle ranks of my Martial Arts training, all the while creating friends who were outside the normal social structures of a teenager, I yearned to share this environment, community and culture with other families and their children who might be feeling like they don’t belong. I wanted to share the experience of an place where everyone is accepted as long as they want to train in the Martial Arts and grow into the person they were born to become. I eventually realized my goal and opened a family-owned, all-inclusive Martial Arts academy in the heart of Algonquin, Illinois where it doesn’t matter where you live, what you wear or the model of your cell phone. All that we focus on is building the drive to improve – one kick, strike or block at a time.

For the past 13 years, Kyuki-Do Martial Arts has been helping to shape children into confident, outgoing and ambitious young people. As kids walk through the door, unsure of what to expect, they are equipped with the necessary tools to build confidence through understanding, learning and a ‘yes I can’ attitude. It is this attitude that is the most powerful tool of the Martial Arts. Children are given small challenges in the beginning belt levels and as long as they try their best, they’re sure to be successful. As their belt level increases, their mental and physical challenges intensify. We focus on building their confidence and self-esteem through cycles of
challenges where they experience what success feels like and learn that failure is only ever temporary. As in most Martial Arts, the belt system helps children learn how to set short-term goals by striving to achieving the next belt, kick or new technique. In the same vein, it allows them to look to the future with the ultimate long-term goal of becoming a black belt, not only in the Academy but in life as a whole.

When you enroll your child into a program at Kyuki-Do Martial Arts, you can look forward to the following results:

You can connect with us by calling (224) 209-8991 to talk with our friendly staff who will walk you through our offering and advise you on any questions you might have.

You can also Click Here to see if Kyuki-Do Martial Arts is going to be a good fit for you and your family.

If you’ve been looking for a way to help your child learn how to stand tall as they face life’s challenges, build their physical and mental strength to look their fears in the eye without hesitation and develop a respectful and strong voice when sharing their beliefs and convictions then Kyuki-Do Martial Arts is the perfect place for your family! 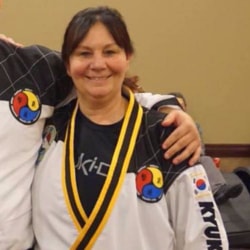 Master Christine Bjorkquist has been training in the Martial Arts since the age of 19. She has been training for over 32 years and teaching for 14 years. Christine is a retired McHenry County Sheriff’s Deputy and earned her 6th Dan Masters rank in November 6, 2020.

Growing up, my home life was very chaotic as one of my parents was chronically ill and the other was unsupportive. My father was critical of everything I said or did and as a result, I lacked the confidence to openly give my opinion in a group. This left me feeling isolated and, perhaps worst of all, I was unable to say no to negative people and unhealthy peer pressure. I began making unhealthy life choices that were fast leading me down a dark path.

I was introduced to the idea of Martial Arts by a co-worker when I was 19. From the very first class, I was hooked and never looked back. Signing up for the class was the first thing I did to prioritize myself and my wellbeing and it ended up being the best decision I ever made.

Through the Martial Arts, I started to find my own voice and slowly built the foundation of confidence I needed to excel in life. I finally felt accepted for who I am and found the much-needed structure that I was, unfortunately, lacking at home.

As I progressed in the Martial Arts, I enjoyed many accomplishments, eventually earning Black Belts in several styles. This led me to pursue a career in law enforcement, taking a position at the McHenry County Sheriff’s Department as a Patrol Officer and Canine Handler. After retiring the K-9, I began teaching defensive tactics to our Patrol division, Correctional Department and Courthouse Security Officers.

During my time in law enforcement, I regularly encountered families whom I knew could benefit from the Martial Arts. I saw children who were in desperate need of the structure, confidence and unconditional support that Martial Arts offers. However, I was limited by the law enforcement arena, which emphasized the message that a personal approach was unprofessional, so I was not able to offer these insights to the people whom I knew needed it most.

As a police officer, I knew that attempting to make changes once children were already in trouble with the law was a difficult task and I realized that what many of them were lacking was a role model who could guide them through life’s challenges.

Although I was successful in my career, I felt as if there was something missing and I yearned to get back into the positive, healthy space that Martial Arts had offered me – a place in which I could flourish both physically and mentally.

Upon making the decision to return to Martial Arts, I met Rick, who eventually became my husband. Together, we established a Martial Arts Academy, where we have the ability to be proactive in providing an environment for children where they can enjoy the benefits of the practice and flourish in their daily lives before they begin to turn to unhealthy habits and make bad decisions that might determine the rest of their lives.

For 13 years, Kyuki-Do Martial Arts has been providing children with an environment in which they can learn to stand tall, make eye contact and believe in themselves through the power of Martial Arts.

We provide a range of programs of different complexities and challenge-levels in order for them to build rapport and develop social skills while learning how to remain disciplined and enjoy their successes. Through the practice, we build strong, young leaders who are capable of establishing genuine connections with others and making a meaningful impact in their communities.

As children progress through the belt levels, they are challenged at their own pace so as to build stamina and healthy coping mechanisms for instances of failure and hardship, which they are sure to face in some form throughout their lives.

When you enroll your child into a program at Kyuki-Do Martial Arts, you can look forward to the following results:

You can connect with us by calling (224) 209-8991 to talk with our friendly staff who will walk you through our offering and advise you on any questions you might have.

You can also Click Here to see if Kyuki-Do Martial Arts is going to be a good fit for you and your family.

If you’ve been looking for a way to help your child learn how to stand tall as they face life’s challenges, build their physical and mental strength to look their fears in the eye without hesitation and develop a respectful and strong voice when sharing their beliefs and convictions then Kyuki-Do Martial Arts is the perfect place for your family!

OUR Algonquin & lake in the hills MARTIAL ARTS CLASSES focus on..

Enter your info below to get your FREE CLASS!

By opting into the web form above you are providing consent for Kyuki-Do Martial Arts of Lake in the Hills to send you periodic text messages. Standard rates may apply. You may opt-out anytime by replying STOP.